Kate builds Hope from her own dark journey 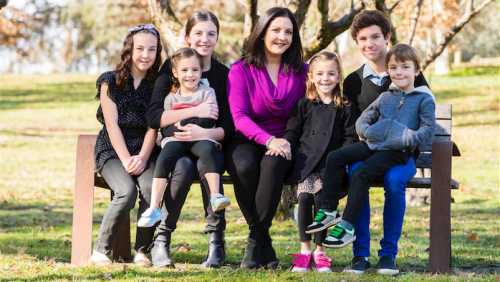 REFORMED gambling addict Kate Seselja has walked a difficult journey – and believes she’s come out the better for it.

Kate, a married mum-of-six, was plagued by a poker-machine addiction.

For 15 years only her immediate family and close friends knew of her struggles with gambling until she found hope.

Now Kate speaks openly about addiction and has recently launched a not-for-profit organisation called The Hope Project, which aims to work collaboratively with existing services and organisations to educate workplaces, schools and community groups on sustainable, hopeful living. “My speaking openly about it completely debunks the whole stereotype around what the struggles look like because I certainly kept it camouflaged from people, apart from my immediate family and a few close friends, for 15 years,” Kate says.

Her struggle with gambling started when she was 17 – a habit she picked up in an attempt to spend time with a boyfriend. When she married years later and moved to Canberra she hoped it would mean a fresh start.

“When we were expecting our second child, we moved in with my in-laws and we were building a house and running our own business and that was all at 23 and the pressure just built up,” Kate says.

“One day when I was out sourcing some materials for the build and my mother-in-law had my son, I drove past a club and that thought just popped back in my head: ‘You’ve got all this money sitting in your account to build the house – remember that time you put in $10 and won $1000? What if you did that again and again and again? And we can have the house built sooner.’

“Obviously that didn’t happen and I quickly burnt through about $30,000 and didn’t know where to go from there. I almost took my life at that point.”

It took several attempts at seeking help before she finally decided that enough was enough.

“I was putting my hand up to get help, time and time again and not getting the right help and feeling completely misunderstood,” she says.

It was when she started seeing a counsellor who really helped her restore her self-esteem that things started turning around.

“Joining a group helped me to have different voices and experiences that other people encountered. And hearing the truths about your own life through other people’s experiences is powerful,” she says.

“I subsequently ended up training to take over that group two years from that point in 2012.

“I thought I could still do more than this and reach more people and be that light and be that hope for people who have none or have given up hope.”

Since her recovery, Kate says her family is proud of what has come from her darkest moments.

“Not just within myself but the restoration of my husband and our marriage and that they know, we’re human beings first and foremost and there’s nothing in life that they can’t overcome, if they are supported and loved through it rather than judged and shamed and stigmatised.”

The Hope Project’s current program is designed to equip people with skills and understanding to deal with stress and overwhelming and unsustainable environments. Using existing research, the program can be tailored to different audiences.

She said her organisation doesn’t work on a set-fee structure as she doesn’t want price to ever get in the way of people seeking help.